This is the promised follow up to the Java EE 7 with Angular JS – Part 1. It took longer than I expect (to find the time to prepare the code and blog post), but it’s finally here!

The original application in Part 1 it’s only a simple list with pagination and a REST service that feeds the list data.

In this post we’re going to add CRUD (Create, Read, Update, Delete) capabilities, bind REST services to perform these operations on the server side and validate the data.

The Setup is the same from Part 1, but here is the list for reference:

The backend does not required many changes. Since we want the ability to create, read, update and delete, we need to add the appropriate methods in the REST service to perform these operations:

The code is exactly as a normal Java POJO, but using the Java EE annotations to enhance the behaviour. @ApplicationPath("/resources") and @Path("persons") will expose the REST service at the url yourdomain/resources/persons (yourdomain will be the host where the application is running). @Consumes(MediaType.APPLICATION_JSON) and @Produces(MediaType.APPLICATION_JSON) accept and format REST request and response as JSON.

For the REST operations:

The url invoked for each operations is very similar. The magic to distinguish which operation needs to be called is defined in the HTTP method itself when the request is submitted. Check HTTP Method definitions.

For getPerson and deletePerson note that we added the annotation @Path("{id}") which defines an optional path to call the service. Since we need to know which object we want to get or delete, we need to indicate the id somehow. This is done in the service url to be called, so if we want to delete the Person with id 1, we would call http://yourdomain/resources/persons/1 with the HTTP method DELETE.

That’s it for the backend stuff. Only 30 lines of code added to the old REST service. I have also added a new property to the Person object, to hold a link to image with the purpose of displaying an avatar of the person.

For the UI part, I’ve decided to split it into 3 sections: the grid, the form and the feedback messages sections, each with its own Angular controller. The grid is mostly the same from Part 1, but it did require some tweaks for the new stuff:

Nothing special here. Pretty much the same as Part 1.

A few more attributes are required to configure the behaviour of the grid. The important bits are the data: 'persons.list' which binds the grid data to Angular model value $scope.persons, the columnDefs which allow us to model the grid as we see fit. Since I wanted to add an option to delete each row, I needed to add a new cell which call the function deleteRow when you click in cross icon. The afterSelectionChanges function is required to update the form data with the person selected in the grid. You can check other grid options here.

The rest of the code is self-explanatory and there is also a few comments in there. A special note about $rootScope.$broadcast: this is used to dispatch an event to all the other controllers. This is a way to communicate between controllers, since the grid, form and feedback messages have separate controllers. If everything was in only one controller, this was not required and a simple function call would be enough. Another possible solution if we want to keep the multiple controllers, would be to use Angular services. The used approach seems much cleaner since it separates the application concerns and does not require you to implement additional Angular services, but it might be a little harder to debug if needed.

Here is the looks: 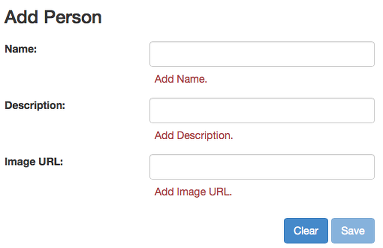 A lot of codeis for validation purposes, but lets look into this a bit more in detail: each input element binds its value to person.something. This allows to model the data between the HTML and the Javascript controller, so we can write $scope.person.name in our controller to get the value filled in the form input with name, name. To access the data inside the HTML form we use the form name personForm plus the name of the input field.

HTML5 have its own set of validations in the input fields, but we want to use the Angular ones. In that case, we need to disable form validations by using novalidate at the form element. Now, to use Angular validations, we can use a few Angular directives in the input elements. For this very basic form, we only use required, ng-minlength and ng-maxlength, but you can use others. Just look into the documentation.

Angular assigns CSS classes based on the input validation state. To have an idea, these are the possible values:

To display an invalid input field we add ng-class="{'has-error' : personForm.name.$invalid && personForm.name.$dirty}" to the containing input div. This code evaluates if the name in the personForm is invalid and if it’s dirty. It the condition verifies, then the input is displayed as invalid.

Finally, for the form validation messages we need to verify the $error directive for each of the inputs and types of validations being performed. Just add ng-show="personForm.name.$error.minlength" to an HTML display element with a message to warn the user that the name input field is too short.

For the form controller, we need the two functions that perform the operations associated with the button Clear and the button Save which are self-explanatory. A quick note: for some reason, Angular does not clear input fields which are in invalid state. I did found a few people complaining about the same problem, but I need to investigate this further. Maybe it’s something I’m doing wrong.

REST services are called using save and delete from the $resource object which already implement the correspondent HTTP methods. Check the documentation. You can get a $resource with the following factory:

The rest of the controller code, are functions to pickup the events created by the grid to load the person data in the form and delete the person. This controller also create a few events. If we add or remove persons, the grid needs to be updated so an event is generated requesting the grid to be updated.

This is just the top section of the application, to display success or error messages based on save, delete or server error.

This is the controller that push the messages to the view. Listens to the events created by the grid and the form controllers.

Uff.. that was a lot of code and new information. Let’s see the final result:

You can clone a full working copy from my github repository and deploy it to Wildfly. You can find instructions there to deploy it. Should also work on Glassfish.

Since I may modify the code in the future, you can download the original source of this post from the release 3.0. In alternative, clone the repo and checkout the tag from release 3.0 with the following command: git checkout 3.0.

This was a very long post, actually the longest I’ve wrote on my blog. If you reached this far, thank you so much for your time reading this post. I hope you enjoyed it! Let me know if you have any comments.